The Science of Teamwork

The term teamwork has graced countless motivational posters and
office walls. However, although teamwork is often easy to observe, it is
somewhat more difficult to describe and yet more difficult to produce.
—James E. Driskell, Eduardo Salas, and Tripp Driskell, Foundations of
Teamwork and Collaboration, APA 2018

While everyone agrees that
teamwork is desirable, management gurus and thought
leaders differ on what successful team collaboration looks like and how to
get there. It's a challenging topic to discuss since individual teams can
vary so widely. However, psychologists—like the researchers behind the
“overlapping facets of team effectiveness domain”—have
identified core qualities that all teams share which in turn feed into their
outcomes. We'll investigate some of the most important elements below.

The basics of successful team collaboration

At its most basic, every team must have an objective—a product
they're building, a strategy they're developing, or a problem they're trying
to solve.

In order to succeed, this purpose must be clearly articulated. We know
that goal-setting is linked to higher achievement in
individuals and the same is true in teams:
Research shows that goal clarity positively affects team
performance. Goal-setting may look different between organizations—some
teams may use a Waterfall approach and outline all their goals at the
outset of a project. Other teams may be more agile and add or adjust goals on
a rolling basis. Both approaches work, as long as teams clearly articulate
their goals and the criteria for their achievement.

According to a Northwestern University
study, culture is "a set of norms and values that are
widely shared and strongly held throughout the organization." All teams have
a set of beliefs and norms, whether implicit or explicit, which forms the
social environment in which they operate.

Criteria for success: Foster an environment of psychological safety

Culture determines a team's ability to be innovative, take calculated
risks, and learn from their mistakes. Teams in which members feel free to
express observations and voice their opinions are better poised to achieve
their goals. Psychologists use the term “psychological safety” to
describe this phenomenon. “Psychological safety describes people's
perceptions of the consequences of taking interpersonal risks in a particular
context such as a workplace,” according to one Harvard Business School
study. People who feel psychologically safe are more
likely to share knowledge instead of hoarding it, voice suggestions, and
spearhead new initiatives. In short, they're more engaged team members.

Every team is composed of a certain number of members. Increasingly,
research shows that team size determines the team's outputs—whether
they develop existing ideas or disrupt the status quo.

Criteria for success: Keep teams as small as possible

A recent
Nature paper looked at 65 million team
outputs—research papers, patents, and software products—in the
fields of science and technology to discover how these outputs change between
large and small teams (they define “small” as three people or
less). Their findings: “Whereas large teams tended to develop and
further existing ideas and designs, their smaller counterparts tended to
disrupt current ways of thinking with new ideas, inventions, and
opportunities,”
noted the researchers. When you're in a small team,
you're more likely to take risks and be original. To maximize innovation,
keep team size to a minimum.

You might protest that some projects are outside the scope of a small
group of individuals. You need more than three people to build a rocket or
develop a successful vaccine. “High-impact discoveries and inventions
today rarely emerge from a solo scientist, but rather from complex networks
of innovators working together in larger, more diverse, increasingly complex
teams,” according to the researchers. In order to manage these kinds of
projects, organizations should create “multi-team systems” (MTSs)
in which small teams are embedded in a larger network of teams working
together on different aspects of the same problem. Many scientific
collaborations are organized this way, with small groups of researchers at
different universities forming a larger team working towards a specific goal,
like searching for
dark matter.

Every team is a collection of individual members with their own unique
skills, abilities, strengths, and weaknesses.

KSAOs stands for knowledge, skills, abilities, and other
characteristics. Great teams are composed of members who complement each
other's strengths and balance their weaknesses. “In an ideal situation,
organizations could recruit, select, and compose teams with an optimal mix of
members' KSAOs,” write
researchers. However, reality is usually more complex.
It's not always possible to form teams on the basis of member ability and
team members may come and go. However, there are ways in which organizations
can foster these complimentary KSAOs, such as by augmenting members' existing
skills with training.

Team charters are documents that teams create when the members initially
form a team, outlining the purpose of the team (the “why”), how
they plan to work together (the “how”), and their end goals (the
“what”). Some team charters also include success metrics.
Researchers have found that when teams make use of
charters, they experience improved process outcomes, including better
“communication, effort, mutual support, cohesion, and member
satisfaction.” By putting your team mission in writing, you create a
foundation for successful collaboration. 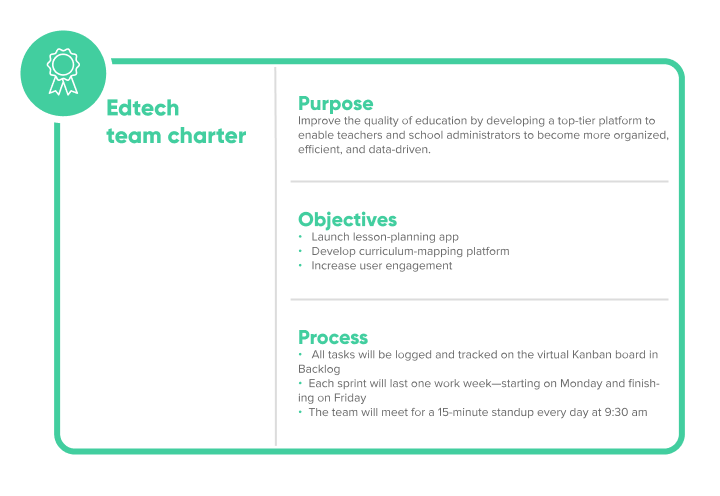 Planning is essential to team success. Whether sweeping and strategic,
like the company direction for the next five years, or limited and granular,
like a new feature, it provides direction for the team and objectives to work
toward. (And we're already covered how essential goal-setting is for teams).
Even agile teams, who might not follow a plan in the traditional sense,
create task
backlogs and
set goals—they just tend to recalibrate their
priorities more frequently with the goal of being flexible and responsive to
change.

Team psychology
researchers have identified some core elements of
high-quality planning. These include:

Regardless of the size or scope of your task, if you're able to analyze
your current position, think critically about the future, and communicate
effectively with your team, you'll be in the best position to make a
high-quality plan.

“What gets measured, gets managed”—the most famous thing
management theorist Peter Drucker
never said—is a favorite cliché of managers and
consultants. And there's some truth to it. While not everything that matters
can be measured (and for that matter,
not everything we can measure matters), it can
nonetheless provide useful insights. The trick is identifying what to
measure. For instance, measurement might not be able to adequately capture
your team's enthusiasm, but it can capture whether you're on track to reach
your goal of releasing five new features this month.

There are a variety of approaches teams can use to measure progress toward
their goals. One such approach is using
Key Performance
Indicators (KPIs). Teams set targets and then measure their progress
based on leading KPIs, indicators which may offer a clue to future success,
and lagging KPIs, which show past success. For instance, if a content team's
goal is to publish fifty blog posts this quarter, their lagging indicator
might be how many blog posts they published last month and their leading
indicator might be how many blog posts they have started working on this
month. Good KPIs should measure what is intended, show evidence of
advancement, and utilize a balance of both leading and lagging indicators to
capture progress.

Other approaches are more visual. For instance, teams can use
Gantt charts to lay out the start and finish dates of
their tasks on a calendar, giving them a bird's-eye view of their project
progress. Or, they can use
burndown charts to graph the amount of work they need to
get done versus the amount of time they have to do it in. Any of these
measurement systems can be effective—which one you choose depends on
your team's needs and preferences.

Originating in the military—where teams frequently need to evaluate
past performance and make adjustments on the fly—debriefing is a
reflective tool that allows teams to recalibrate their approach as they go.
It's “a structured learning process designed to continuously evolve
plans while they're being executed,” writes Doug Sundheim for the
HBR. And it's effective: Psychologists have found that
organizations can improve team performance by
20-25
percent by conducting effective reviews and debriefs.

Depending on the team, these reviews may vary in length and frequency. For
instance, many teams have
daily standups which are essential mini-debriefings,
reviewing yesterday's achievements and today's goals. Other teams host
debriefings after completing major project milestones. Either
approach can work, but Sundheim recommends having at least one team
debriefing at a set time each week, to make it habitual.

To have an effective debriefing, team members must, to borrow a military
idiom, ”leave their stripes at the door”—that is to say,
abandon status and ego in favor of vulnerability and curiosity. While it may
be more uncomfortable at first, having an open conversation about the root
causes behind your team's successes and failures will result in more learning
in the long run.

Fostering a Culture of
Collaboration