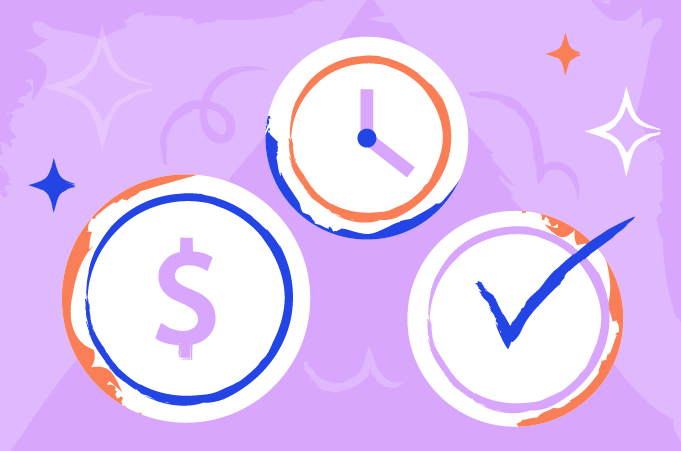 If you’ve ever managed a project, then you’ll have dealt with triple constraint — whether or not you knew it at the time. Also known as the Iron Triangle and the Project Management Triangle, it refers to the three elements that make up every single project — i.e., time, scope, and cost — and the impact each of these things has on quality.

What does the triple constraint mean for project managers?

The triple constraint shows how a project’s success is bound to these three interrelated elements:

As a PM, it’s your job to manage each of these elements. And, as with pretty much everything to do with project management, this isn’t as straightforward as it sounds.

In an ideal world, you have plenty of time, a big budget, and a limited number of tasks to complete. But this scenario is rare. More often than not, you’ll have to balance each of these things for the best quality with the resources available. If you adjust one of the three, it’ll often have a knock-on effect on the other two.

For example, if you’re behind on your schedule, you can pay more people to help you out, which increases the cost. Or you can reduce the features of the project, which is reducing scope. Another alternative is to change the due date to give yourself more time. Getting it right is a balancing act project managers perfect throughout the course of their careers.

Why the triple constraint is useful

The triple constraint gives you an idea of what can and can’t be adjusted throughout the course of the project.
While it’s generally true that the more money and resources you have available, the better, there is a limit. Without limitations, there is a risk your project will stall or stagnate. After all, if there’s nothing driving you forward, then what’s your motivation?

These constraints are also an important part of the project manager-team-client relationship. They can be used as a formal framework for agreeing on what should be provided, for how much, and by when. It sets expectations that everyone can agree on — and provides a benchmark for adjustments if they need to be made.

Time, cost, scope: How to keep each one under control

The goal of any project is to be early and under budget. And achieving this starts with the scope.

Every project is made up of a set of interrelated tasks. And as a project manager, it’s your job to prioritize them in the most logical, effective way. Fail to do this, and you run the risk of scope creep — that’s when things start taking longer than they should, or you take on additional jobs that weren’t planned into the schedule.

As well as organizing the order of your tasks, you’ll also need to assign people to work on them. This is what’s known as resource allocation; it’s important to be flexible and have a backup on the books. That backup could be freelancers or contractors.

This is the amount of time allotted to complete the overall project. It’s usually broken down into a series of smaller task-based chunks — something that’s officially known as a work breakdown structure.

These tasks are then prioritized, their dependencies defined, and then they’re arranged on a timeline, such as a Gantt chart. 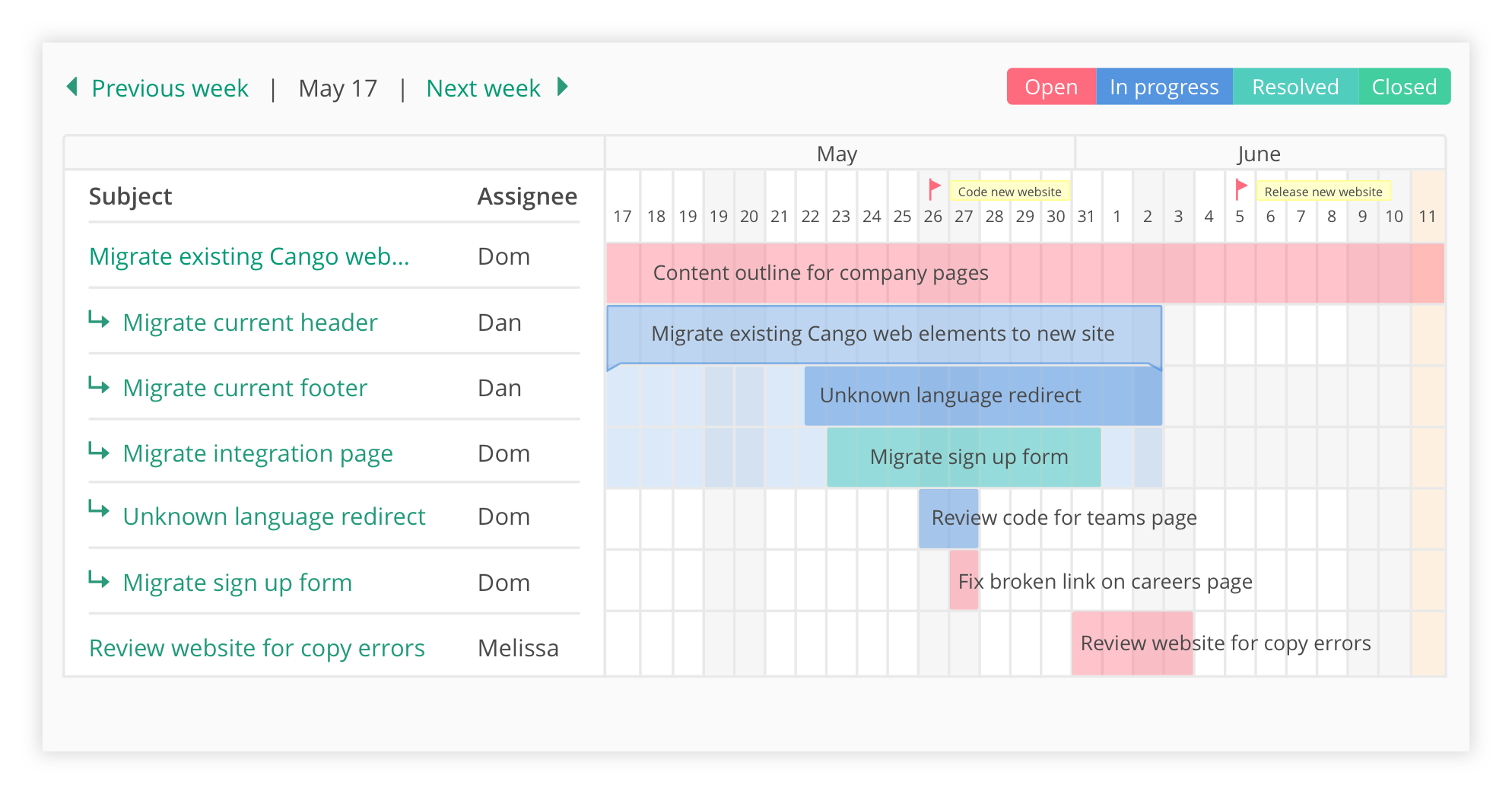 Example of a Gantt chart in Backlog

A Gantt chart is a timeline that breaks projects down into smaller tasks, with dates to show durations and start/finish times. It helps you visualize, schedule, and sequence activities. It’s also often used in conjunction with the Critical Path Method, which can help you work out your project’s start and end date.

Costs can refer to fixed and flexible costs, as well as estimates and actual figures. There are several ways you can predict cost, including using historical data from similar projects and determining figures for labor and resources on a unit-by-unit basis.

Whichever method you use, it’s important to track and manage your costs as your project progresses, to stop figures spiraling out of control. Spreadsheets are one option, but if you want to make things extra-easy, project management software that automatically tracks figures in real-time is the way to go.

How to master the triple constraint

Projects are changeable things, and while it’s important to stick to the triple constraints as much as possible, it’s also important to stay flexible. Projects will grow and shrink, clients’ needs change, and staff takes days off.

Sometimes, there’s no way to predict how long a certain job will take or cost until it begins, but having an awareness of the shifting landscape will help you handle these changes in your stride.

As a project manager, it’s important to know how each of the triple constraints interacts with each other. Before project kick-off, do your due diligence and assess how adjusting one of the three elements impacts the other two. Come up with a worst-case scenario contingency plan, so you’re prepared for whatever comes your way.

This is especially important when working with outside resources — like deliveries and contractors — because you have less control over these elements.

As processes evolve, a new version of triple constraint has emerged — value triple constraint (VTC). This new iteration came about with the idea that time and cost are not always the most important points of a project. A certain amount of both time and money are available to a company or team no matter how they use it. So a PM has the ability to move deadlines and resources from project to project to complete them all. Adding this extra dimension then changes the triple constraint to scope, capability, and value.

Obviously, scope remains the same. But, as for the other two:

The capability of your team can be determined by several factors. One of those is the skillset of the team members. You can only achieve what is capable by your team overall. Although we took cost out of the equation, that overall amount of money to work with can become a factor in capability.

Anything that limits your team’s ability to perform a task is a limit to their capability.

The value is the overall measure of the outcome of the project. The number of benefits or necessity that the project presents will have a large impact on its scheduling and required focus.

The value of the project is why we take on, manage, and track projects in the first place. This factor could be summed up by a sort of “eye on the prize” mentality.

Project management software is the gold standard for keeping a firm grip on cost, time, and scope.

By using specially dedicated software, you can easily track metrics as your project progresses. Backlog, our own PM tool, includes automatic updates and notifications that make it easier to make triple constraint adjustments in a more timely manner. It also includes task features designed to help you create, prioritize and assign tasks — which makes the whole project management process a little bit more collaborative and efficient.