Death of the master builder

St Peter's Basilica. Notre Dame. The United States Capitol Building. What
do these three iconic buildings have in common? They were all erected by
“master builders”—part architect, part
engineer, part building site supervisor—who designed them and oversaw
their construction from start to finish. From medieval times to the Victorian
era, this was the primary way buildings were constructed.

Master builders were true renaissance men—women were largely
excluded from the field—like famed British architect Sir Christopher
Wren (in addition to his extensive portfolio of churches, palaces, and
libraries, he founded the Royal Society and taught Astronomy at Oxford). They
had to understand every aspect of construction, from mathematics to masonry,
enabling them to coordinate a team of skilled tradespeople to realize their
vision. While the master builder would sometimes change over the course of
the project—and often did, in the case of grand projects that took
decades, if not centuries, to complete—there was always one point
person in charge—someone who not only understood the vision for the
whole but how every component fit into it.

But all that changed at the beginning of the 20th century.

As our knowledge of architecture and construction grew, it became far too
complex for any one person to handle. It was beyond human capacity for one
person to be “master” of it all. Instead, a profusion of
specialists took the place of the master builder: architects, engineers,
brick and stonemasons, glass technicians, electricians, the list goes
on—all experts of their own domains. And it's not just construction. As
human knowledge grows ever deeper and more complex, similar transformations
have occurred across nearly every field, from medicine to business. In order
to succeed in today's knowledge economy, we don't need master
builders—we need specialists who can work together, joining their
expertise to solve complex problems collaboratively. We need strong, collaborative teams.

The state of team collaboration

While there's a growing recognition of the importance of teamwork in
completing ambitious projects, we have a very human tendency to celebrate
remarkable individuals over group achievement. Nowhere is this more evident
than in Silicon Valley. There, the narrative of the lone genius proliferates.
Companies seek to hire “10x-ers” and brilliant engineers aspire
to become household names like Elon Musk (despite his sometimes
questionable tweets).

Yet research suggests the lone genius is a mythical figure—or at
least, an exaggerated one. As a Harvard Business Review (HBR) article reports, a
brilliant new idea or discovery is only the first step of many: “For
any innovation to have an impact, there needs to be a discovery on an
important insight; a viable, scalable solution; and, finally, a business
model that allows the new idea to be adopted.” And crucially,
innovators rarely act alone: In order to succeed, they need teams to support
them.

It's a misconception that comes from the way we've historically treated
work. While team collaboration is as old as humanity itself—humans
have been working together in groups since our hunter-gatherer days—teamwork in the workplace is
new. When the modern concept of work emerged around the time of the
industrial revolution, companies organized around individuals, not teams.
It's only as our world has grown more complex that organizations have
restructured once more around groups.

This return to a team-based structure is strategically significant. It
“enable[s] more rapid, flexible, and adaptive responses to the
unexpected,” according to organizational psychologists Steve W.J. Kozlowski and
Daniel R. Ilgen. They
define a modern team as:

(a) Two or more individuals who; (b) socially interact (face-to-face or,
increasingly, virtually); (c) possess one or more common goals; (d) are
brought together to perform organizationally relevant tasks; (e) exhibit
interdependencies with respect to workflow, goals, and outcomes; (f) have
different roles and responsibilities; and (g) are together embedded in an
encompassing organizational system, with boundaries and linkages to the
broader system context and task environment. 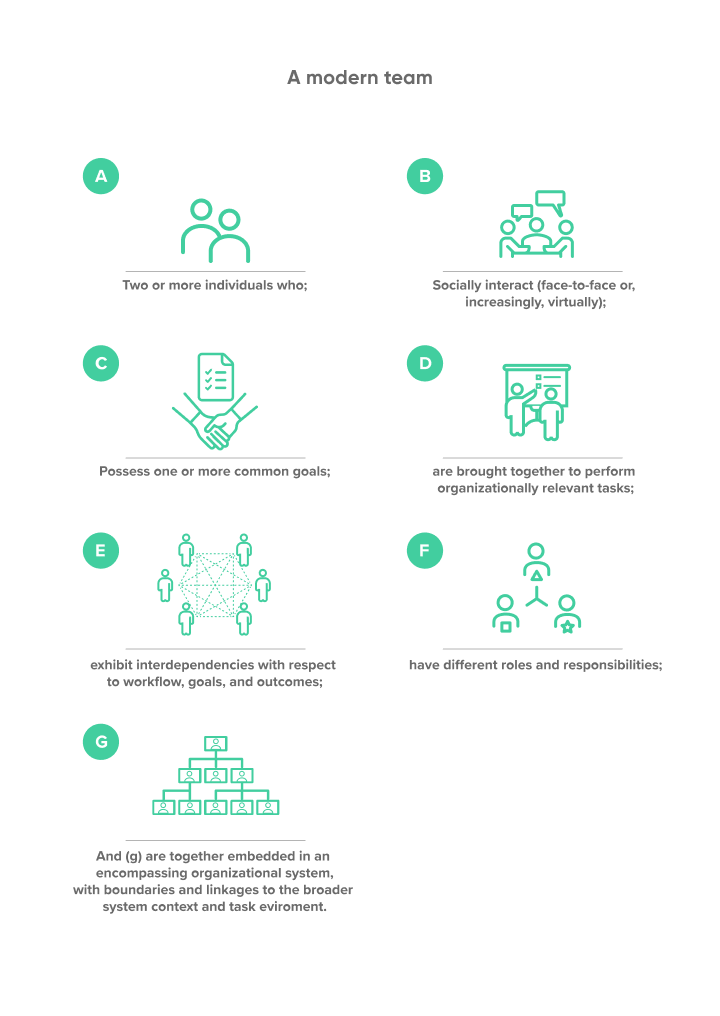 Why is team collaboration important?

Probably the most important thing I've learned up here is the
importance of teamwork.
—NASA Astronaut Douglas Wheelock

Team collaboration is at the heart of everything we do as a species, both
in terms of work and family life. Strong teamwork has enabled us to
accomplish incredible things, like the Apollo 13 mission, the greatest space rescue in history.
But poor teamwork has also caused enormous tragedy and suffering, like the
Federal Emergency Management Agency's (FEMA) slow and disorganized
response to Hurricane Katrina. And the stakes are high:
“Failures of team leadership, coordination, and communication are
well-documented causes of the majority of air crashes, medical errors, and
industrial disasters,” note psychologists Kozlowski and Ilgen in their
research.

The modern business landscape also faces unique pressures that make
teamwork more important than ever for economic success. Competition and
consolidation are on the rise, forcing companies to become more innovative,
agile, and adaptive.
In order to meet these challenges, organizations need to bring together
groups of highly skilled individuals to work together to solve problems and
invent new solutions. Team collaboration is essential for success in today's
economy.

In addition to increased agility and competitive success, team
collaboration provides numerous other benefits for businesses and employees.
These include:

Humans are social animals—so it's not surprising that positive,
collaborative relationships are an important component of workplace
satisfaction. A Taipei Medical University
study found that collaborative relationships are one of
the top two most important predictors of job satisfaction among healthcare
providers. The other is high-quality patient care. Employees are happiest
when they feel like they're part of a high-functioning team that's doing good
work.

While the myth of the
“lone genius” proliferates in our
society, emerging research suggests that it's diverse teams, not solo
innovators, who actually make progress and disrupt the status quo. According
to research by social scientist
Scott E. Page, teams with a range of different
perspectives—this includes professional backgrounds as well as
demographics—outperform groups of like-minded thinkers. When all you
have is a hammer, every problem looks like a nail, but a diverse team has a
whole toolbox.

Teams with a range of different perspectives—professional
backgrounds as well as demographics—outperform groups of like-minded
thinkers.

Two heads really are better than one. An
American Psychological Association (APA) study of
teamwork in the military found that a cohesive team (ie. one in which there
are strong bonds among team members) is more effective than the sum of its
individual members. “Teams can absorb more task demands, perform with
fewer errors, and exceed performance based on linear composites of individual
performance,” study authors Gerald F. Goodwin, Nikki Blacksmith, and
Meredith R. Coats write. In short, a strong team working together
consistently outperforms the sum total of the same individuals working
alone.

Diverse teams that represent their customer base in terms of demographic
distribution are better able to reach their audiences and empathize with
customers, according to a
McKinsey study. This is of key strategic importance, as
the business landscape is increasingly heterogeneous: Women make
70-80 percent of purchasing decisions and the purchasing
power of minority ethnic groups as well as LGBTQ+ folks is on the rise.
“A top team that reflects these powerful demographic groups will have a
better understanding of their market decision behavior and how to
impact,” concludes McKinsey.

Psychologists J. Richard Hackman and Charles G. Morris devised one of the
most common models for understanding how teams function in the 1970s, the
Input-Process-Output (IPO) model. The model demonstrates
that many factors—at the individual, environmental, and group
level—can influence a team's productivity and cohesiveness.

The model is a way of understanding what factors influence team
performance and how to help teams to perform better. Broadly speaking,
organizations can optimize team performance by tweaking a team's inputs or
changing their group interaction processes.

While the IPO model is still useful for understanding team interactions,
there has been growing recognition that reality is often more complex than
the model. In 2017, a group of psychologists updated and expanded Hackman and
Morris' model—rather than thinking of team effectiveness as a series of
inputs and processes, they encapsulated it as groupings of facets which
overlap and inform one another.

While less straightforward, this model better summarizes the complex
network of factors that goes into team effectiveness. In the next section,
we'll highlight some of these key features and the role they play in creating
effective teams.

The Science of Teamwork