The unique and vital role of a Scrum Master explained 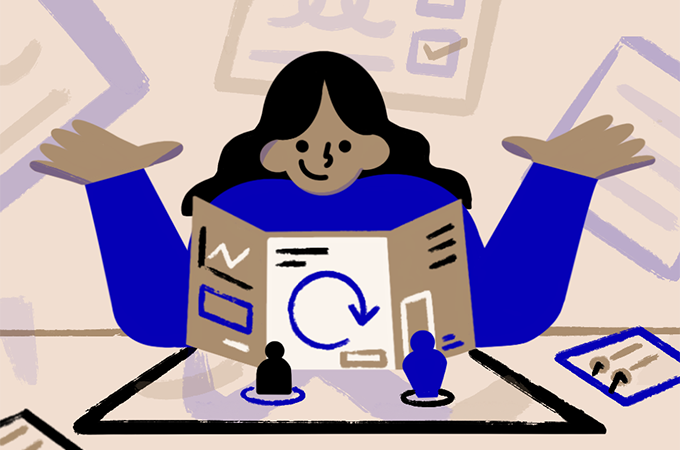 Scrum Master: it’s a cool job title, but one that’s often misunderstood. Before we dive into the whats and whys, here’s a quick definition of Scrum itself, just for context: Scrum involves small teams completing tasks in timed iterations, called sprints. Each sprint contributes to the wider project, which will have its own completion date. It’s based around the idea of continuous feedback, which helps the team better meet the customer’s needs.

A Scrum Master is in charge of this. But not in the way that you might think.

What is a Scrum Master?

By that, we mean they serve the team to help them manage themselves better while promoting a sense of shared decision-making and community. Think of them as coaches, rather than bosses.

What does a Scrum Master do?

In a nutshell, the bulk of their job is to use their extensive Scrum expertise to guide, support, and promote the success of the team.

They are responsible for correctly implementing and maximizing the benefits of Scrum. But they do this while remaining flexible and open to opportunities that could improve productivity.

The Scrum Master makes sure everyone on the team understands the project’s goals and scope. They also offer tools and techniques that help individuals work efficiently.

To understand exactly what it is they do, it’s important to know what they don’t do.

What they don’t do

The Scrum Master isn’t involved in planning the product’s release (which is done by the Product Owner), nor does the project’s overall success rest on their shoulders. That’s down to the team itself.

While they are a key member of the team, they don’t carry out the work themselves, and they don’t give orders. They don’t see themselves as being at the helm or the top of any hierarchical structure. Think of them as facilitators, rather than participators. Or, as The Scrum Guide puts it, a servant leader.

Servant leadership is based on the idea that leaders should empower and uplift those who work for them.

What are the typical Scrum Master responsibilities?

A Scrum Master can be more of a hands-off scheduler, or they can roll up their sleeves and get stuck in with the rest of the team (more on that later). Generally speaking, their responsibilities are as follows:

How does the Scrum Master work with the team?

As we previously mentioned, the Scrum Master is a servant, coach, and leader all rolled into one.

They should be encouraging, uplifting, and motivating. The Scrum Master shouldn’t rigidly stick to Scrum principles and point out when the team is doing it wrong. Instead, they should channel the iterative spirit of Scrum and \point out what teams are doing well. Then they can show them how to improve things the next time around.

Their ultimate goal is to make sure the finished product is the best possible version of itself, and they do this by helping individuals work to their full potential by clearing away obstacles (including unnecessary processes and outdated tech) and offering help where needed.

Think of them as a trekking guide. They clear the route and provide support so each person can reach their destination more efficiently. Or perhaps you’d prefer to think of them as the pit-crew in an F1 race: they maintain and fine-tune the car so each lap is better than the last.

How does the Scrum Master work with the wider organization?

Different types of Scrum Master (and their roles)

Not everyone can agree on what a Scrum Master should do exactly — and, as with all things, it’s down to personal preference. As it stands, there are two broadly accepted paths:

The benefits of having someone entirely dedicated to the role is that they don’t get caught up in the daily deadlines and responsibilities of the team. They’re also never in a position where they have to prioritize between two potentially conflicting roles.

On the other hand, there are others who think if there is time spare, it might as well go to good use. The downside is conflict of interest and a potential need to hire extra help when things get tough. Which could end up costing more.

A Product Manager or Owner is responsible for making sure the product continues to meet its requirements — and that features are worked on in the right order. In other words, they’re focused on the ‘why’ — why does it exist, what purpose does it fill, and how will it achieve its purpose. They also have to continually adjust these parameters as the product and its purpose develops.

They usually work alongside the Scrum Master and/or Project Manager, who is focused more on the ‘how’.

A Project Manager is a leader and decision-maker. They focus on how a goal will be achieved — and if it’s not, they’re held accountable.

They manage things like schedules, budget, risk, dependencies, constraints, delivery dates, and quality. There is some overlap between their role and that of the Scrum Master (both focus on helping teams complete tasks), but do you need both? It depends on how your team likes to work.

The main difference is that a Project Manager has no technical knowledge, can work with multiple teams and manages in a more traditional top-down way. The Scrum Master helps streamline processes in a more collaborative way through coaching.

Do you really need a Scrum Master?

Short answer? Yes — but only if you’re committed to using Scrum. A Scrum Master can only work with complete buy-in to work properly.

It’s a big help to have a Scrum expert working with the team, especially if they’re less experienced with the concept because they can show them how it’s done correctly. If your organization doesn’t have the budget for a full-time Scrum Master, you could consider hiring an external consultant.

If your employees are already experienced in the ways of Scrum, they could feasibly manage themselves. You just need to empower each team member to step into the role as and when required — or train one existing team member to take over on a more permanent basis.

Whether you hire a full-time Scrum Master, a contractor, train up an existing developer, or stick with your Project Manager, remember to make things as collaborative as possible.

Having the right tools for the job can help facilitate the Scrum process. Invest in cloud-based project management software that helps teams self-manage tasks and progress in real-time. Then, whether you have no manager, a project manager or a full-time Scrum Master, you’ll all be on the same page, from one sprint to the next.

Collaborate and bring your projects to life with Backlog
RELATED: Your introduction to Agile & Scrum